skip to main | skip to sidebar

Bay filly by Wonderful out of ISR/Oldenburg approved TB mare by a well known sporthorse TB sire Sifounus by Secretariat. Whimsical received her premium award at the inspection, scoring 8.5 for movements, 8.3 for conformation and type, and 8.4 overall. She is a beautiful refined type with very correct conformation, uphill and ground covering movements. She was imprinted at birth, and handled daily. She will make a top dressage horse, and she is also showing jumping talent. A sweet personality will make her suitable for amateur as well as professionals. Asking $8,500. Please contact Wendy Vinum at 530-396-2650 or wendy@woodbridgefarm.net
Posted by EliteHorseSales at 9:22 PM No comments: 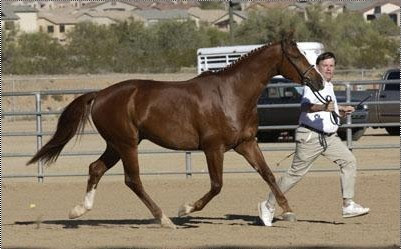 Won in a Million is Registered and branded received the Premium Foal Award and was inspection Res. Champion. Also registered AHA Breeders Sweepstakes & Futurities nominated, so she is eligible for prize money offered at AHA shows. Won in a Million has the extravagant movement and superb temperament of her fabulous sire Wonderful all in a refined and elegant package. Her dam is Oldenburg MMB mare, was USDF All Breeds awards and a Multi Champion with numerous Horse of the Year awards. She received an in hand score of 87.3 and was PCSC Champion Mare with judge Victor Hugo Vidal, having the highest score in movement out of 83 horses. Her full brother Weltwunder also had an impressive score of 87. in hand His first show at age 3 1/2 yrs. he won Dressage Champion open under judge Hilda Gurney and in hand Champion. At age 4 he has already earned Legion of Honor award all in dressage. In Dec. 2005 he won Champion Dressage ATR, Champion Dressage horse and highest score of show (out of 120 rides) with a 72.24. Won in a Million at her first show in Nov 2005 was 2nd place out of 11 mares of all ages with a score of 85.00 with a 9 at walk, 9.5 trot, 9 head/neck and 9 balance and an 8.5 in manners. An incredible score for being only 2 1/2 yrs. old and her first show. Won in a Million is a perfect match for a rider who wants it all in a graceful yet powerful package. In 2006 she will be 3 yrs. and will start under saddle in spring. photo's & show records of Million, her Dam and full brother Weltwunder. Check out Weltwunder's amazing show records at USDF rated show in December, 2004.

Posted by EliteHorseSales at 10:27 PM No comments:

Wonderful was ranked #1 young sire by German FN with dressage breed index of 156 in year 2000, 5 years after he was sold to Wonderful Sport Horses. This ranking was based on his offspring's competition records in Germany. His 8-year-old imported son Winwood has been winning at Intermediare-II in the US. Many offspring are winning at inspections and breed shows and young horse classes. Wonderful's reproducibility is truly proven. Do not miss the opportunity to own a horse that can be in the best of the German league!